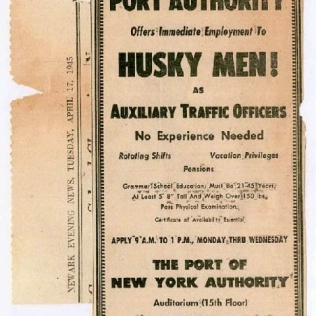 This early notice is representative of how the Port Authority advertised for police recruits in local newspapers.

The first class of the Port Authority Police Department in 1928.

One of the new officers assigned to the George Washington Bridge Command sits astride a Harley Davidson “Knucklehead” motorcycle.

The proper use of firearms was a routine part of a recruit’s training.

The officers were trained in firefighting techniques.

This officer demonstrates proper handling of a fire extinguisher to a group of onlookers.

This officer provides a police escort to a motorcade of dignitaries. 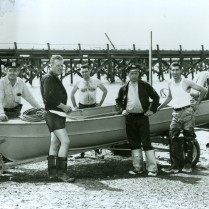 As part of their duties to secure ariport facilities, these officers patrol waters adjacent to the airfield.

On June 1, 1928, 40 young men signed up to become the original Port Authority Police Force.  They were the first officers of a force that would later become the largest transportation-related force in the United States.

Screened from some 200 applicants, they were quickly trained to operate toll booths and fulfill many other functions at the Outerbridge Crossing and Goethals Bridge, which were scheduled to open only four weeks later.

Thirty-one of the new recruits were dubbed “PA Bridgemen” and nine were called “Bridgemasters,” until 1935, when the titles were officially changed to Police Officer and Sergeant.  A Bridgeman’s starting salary was $2,200 a year for a standard 48-hour work week.

Having had no police experience, the 40 original recruits were placed in an intensive training program.  The Port Authority as well as consultants from the U.S. Army, the Red Cross and local police departments created a crash program that would have the young men on the job just in time for the grand opening of both bridges at 5:00 a.m. June 29, 1928.  Instruction included police methods, traffic control, first aid, firefighting techniques and toll-collecting skills.  The new officers held police authority in both New York and New Jersey.