Bayonne Bridge: The Case of the Missing Half-Scissor

On a November day in 1931, a pair of scissors specially crafted for the occasion was used to cut the ribbon in the dedication of the Bayonne Bridge, whose magnificent steel arch was the longest in the world. 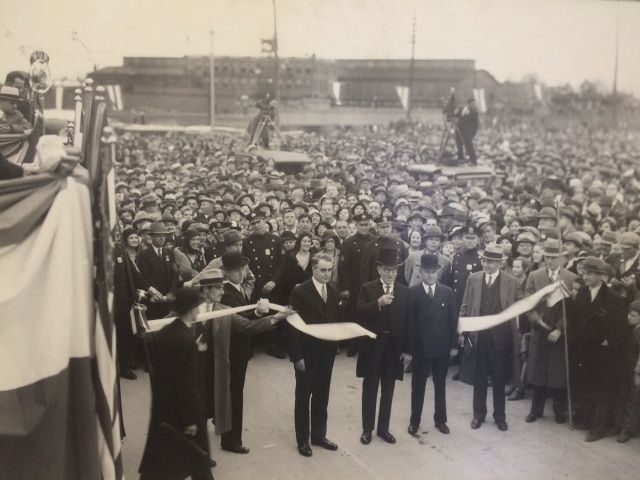 The Bayonne Bridge had a sister bridge in Australia — the Sydney Harbour Bridge, its nearly identical twin that was delivered just several months later.  It seemed fitting that the same pair of scissors – golden, elegant and engraved with the image of the Bayonne Bridge – should be used for both ribbon-cuttings. Their work complete, the scissors were separated, with one blade bequeathed to each country.

This “hybrid” pair of scissors resides with the Stanton Library in North Sydney, Australia.  One blade came from the Brooklyn-made pair of scissors used in the ribbon cuttings of the Bayonne Bridge and the Sydney harbor Bridge.  The other blade was made in Australia.  Photo courtesy of eHive.com

Today, the Australian half, now paired with another blade, remains on permanent public display at the Stanton Library in North Sydney.  The Bayonne half? It vanished, never to be seen again.  The mystery of how it went missing and where it might possibly be continues to bedevil bridge buffs and Port Authority historians alike.  Its loss wasn’t discovered until 1981, when the Port Authority — preparing to celebrate the 50th anniversary of the Bayonne Bridge — wanted to bring the artifact out of retirement. It was nowhere to be found.

The iconic arch of the Bayonne Bridge.  Photo courtesy of HDR, Inc.

Just before the 1931 Bayonne ribbon cutting, Port of New York Authority Vice Chairman Frank C. Ferguson had made this declaration, according to a commemorative booklet published by the Port Authority: “The scissors used in cutting this ribbon will be sent to Australia, where they will be used in cutting the ribbon opening the Sydney Bridge, and then one-half kept there and one-half sent here to America.” 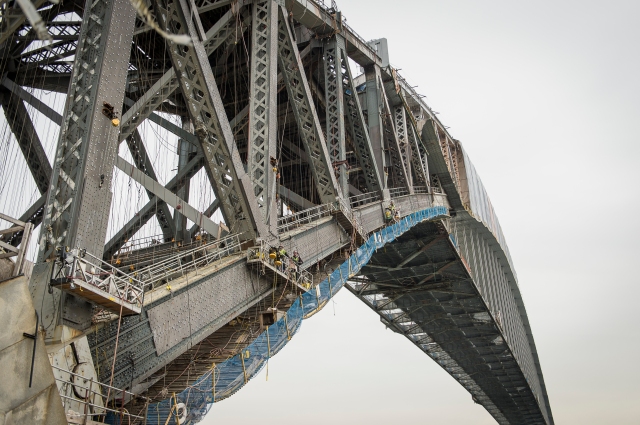 So what became of the scissor blade that was supposed to be returned to the Port Authority after that auspicious inaugurating event?

This much is known: Agency representatives contacted the Australian Consulate in New York because they “wanted to know what happened to the scissors,” according to an August 1981 Sydney Morning Herald article. The inquiry set off a “delicate diplomatic search” but apparently yielded no resolution.

North Sydney local history librarian Shannon Haritos tells Portfolio the blade in question is believed to have been sent back to the U.S., possibly as a second composite pair of scissors, with the original Bayonne blade wedded to one made in Australia.

Beyond this, the historic record is mostly silent. Author Caroline MacKanness wrote in “Bridging the Sydney” that North Sydney’s composite pair of scissors was presented to that city’s mayor following the Sydney Harbour Bridge ribbon cutting. The mayor kept them “as a memento of his service” – and they might have remained with his family ever since, but the family donated them to the North Sydney Council in 2003.

As for the Bayonne portion, if it was sent to the U.S., did the recipient keep it as a memento of that grand opening ceremony? Is this memorial from the “Golden Age of Bridge Building” in the 1930s sitting in some family attic or basement drawer, waiting to be rediscovered? Was it simply lost in transit?

This November, the Bayonne Bridge will mark its 85 birthday. The milestone is sure to be commemorated by Port Authority leaders, local officials and bridge historians. Only one single question remains: Will the long-lost half-scissor finally turn up in time to join the celebration?