Hidden mostly from view so as not to alarm the traveling public, scores of horrifically wounded and mass casualty victims were strewn about the tarmac at LaGuardia Airport on a recent Saturday morning. 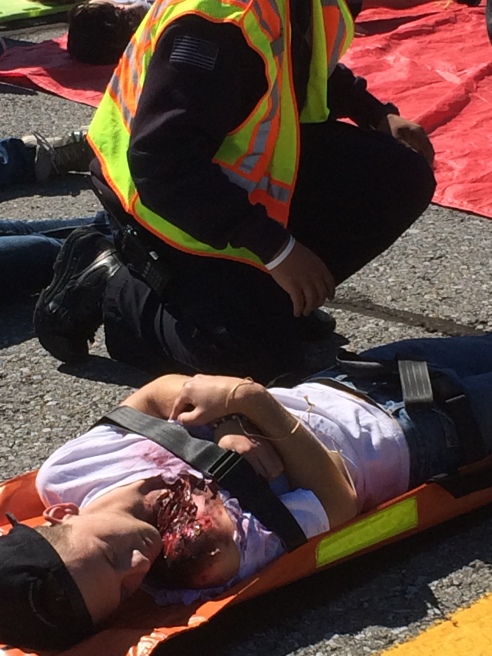 As part of an exercise, a Boeing airliner had collided with a cart on the runway, but nobody knew exactly why the cart was in the glide path of the landing plane. The unauthorized cart or “tug,” (because it tows aircraft around the airfield), had been in the wrong place at the wrong time.  It could have been human error or the nefarious work of someone determined to take lives.

Though the scene at LaGuardia was alarming, it was simply a live emergency drill, one of many such emergency simulations conducted annually by the Port Authority at its facilities.  These exercises help train first responders, law enforcement, medical personnel and other participants to prepare for genuine emergencies, gain practical experience and develop confidence in their skill and knowledge to handle the real thing.

“We believe it is important to create training scenarios that are as real as possible in order to offer our responders the most realistic experience possible. Moulage is one of the ways we achieve that level of authenticity,” said Mike Ricker, Coordinator of Security Exercises and Training. “The severity and type of injuries are driven by the exercise’s precipitating incident, whether it’s a crash, explosion or a fire.”

Moulage is the technical term for the design and application of makeup to create realistic wounds. As any woman can attest, the skillful application of makeup is a combination of technique, art and hard work. At the Port Authority, specially-trained PAPD officers learn how to apply different kinds of clay, liquid latex, red food coloring and even homemade concoctions of their own to create lifelike wounds. Like chefs in a kitchen, many moulage artists have their own favorite recipes for injuries. Some artists are even known to recycle the bones from last night’s rack of ribs, providing they are first boiled and bleached to remove the grill marks.

Ricker said such realism is not about shock value as much as the stress factor. “By mirroring the types of stressful scenarios that our responders will face during an actual event, we are able to improve outcomes by giving them the opportunity to confront these stresses in a training scenario as opposed to experiencing them for the first time during an actual incident,” he said.

The PAPD moulage team, which handles the design of the injuries, consults with members of the security team and varies the injuries based on the training scenario being enacted. For example, Ricker said, “in exercises that involve fire we would generally see victims with burns and smoke inhalation. An aircraft crash or train derailment might produce traumatic injuries such as severe lacerations, fractures and deep puncture wounds.”

In the highly-choreographed world airside at the region’s airports, drills and the elaborate preparations for them are taken very seriously. Ricker and the other members of the security team and PAPD aren’t taking any chances. Because anything that’s even slightly amiss could mean the difference between life and death.

“We are after the best possible outcomes,” he said.