Some walls protect people while others create boundaries.  Some walls decay eventually and crumble into ruin.  But the “Living Wall” at Liberty Park, designed as a piece of serenity in an urban public space, invites millions of people to come together from all walks of life to simply breathe fresh air and enjoy the beauty. 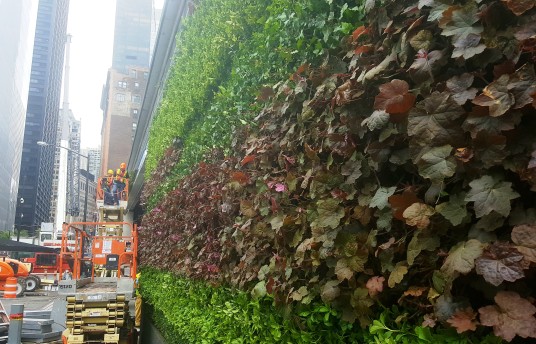 Almost 15 years after 9/11, the opening of Liberty Park today marks another milestone in the revitalization of Lower Manhattan. The 336–foot wall promises to make the park an attractive destination for everyone in New York City.

“This park symbolizes the Port Authority’s commitment to rebuild and improve the WTC site while memorializing all those whose lives were lost on 9/11, ” said Port Authority Chairman John Degnan.

“Creative vertical gardening is transforming what otherwise would be the prosaic walls of the Vehicle Security Center into green space for New Yorkers and visitors to the World Trade Center,” said Pat Foye, Executive Director of the Port Authority.

“The Living Wall provides a green space that symbolizes the resiliency of New Yorkers, the vibrancy of Lower Manhattan and its connection to the Memorial Plaza,” said Steve Plate, Port Authority Chief of Major Capital Projects.

The wall, which is 25 feet high, was built with 826 panels to hold more than 22,000 plants. An 18-zone drip irrigation system is placed strategically to water the plants while small gutters catch extra water that may not be absorbed.

The plants are arranged in a staggered, horizontal grid to complement the 9/11 Memorial.  From a landscaping perspective, the chosen plant species – each having a different color, leaf texture and size, and growth habit – work together to soften the scale and façade of the building, and to provide year-round visual interest.

In addition to the wall, the park also features the Horse Soldier statue in honor of the troops who served in Afghanistan during Operation Enduring Freedom; a descendent of Anne Frank’s famous Horse Chestnut Tree, and more than 150 trees and shrubs. Construction of the Greek Orthodox Church continues on the park and will serve as both a church and bereavement center. The southwest corner of the park will feature the Liberty Street pedestrian bridge that crosses over West Street to Brookfield Place in Battery Park City.