The solemn sound of bagpipes often causes goosebumps and the shivers, no matter whether it’s a 90-degree day or freezing cold outside.  That’s because bagpipe music possesses the emotional power to stir the soul and evoke a sense of pride, honor and history.

Members of the PAPD Pipes and Drums Band

Thanks to the efforts of the Port Authority Police Department’s Pipes and Drums Band, three high school students, all bagpipers themselves, each received recently a scholarship of $1000 from the PAPD Pipes and Drums Band to help defray the costs of their college educations.

The scholarship was established on the 10th year anniversary of 9/11 to honor the heroic actions of three PAPD pipe band members who died in the attacks on the Twin Towers. Police Officers Liam Callahan, Steve Huczko and Richie Rodriguez were first responders to the World Trade Center.  They assisted in the evacuation and rescue of thousands of people inside the towers, but tragically were inside the towers when they collapsed. 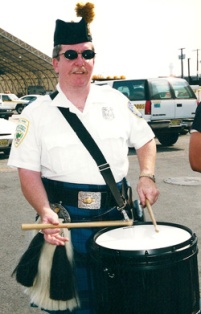 “[The scholarship] is all about honoring our fallen brothers, who are no longer with us,” said Scholarship Chairman and PAPD officer, Brian Cassidy.

This year’s recipients include Matthew Lynch and Vincent Dionis, who are from Archbishop Molloy High School in Queens.  Both Matthew and Vincent participated as band members in the NYC-based New York Metro Pipe Band.  Sama Manchanda attended Governor Livingston High School in Berkeley Heights, NJ, where she was a member of Governor Livingston’s Highlander Marching Band, one of a handful of high school pipe bands in the entire region. She is also a member of the St. Colmucille United Gaelic Pipe Band in Kearny,NJ.

With assistance from the NJ United Pipe Band – a group of affiliated pipe and drum bands throughout NJ, comprised largely of police officers and firefighters – PAPD reaches out to different high schools to find potential scholarship recipients.  In order to receive an award, students must belong to pipe bands, but also express an interest in pursuing law enforcement as a career. Successful recipients are well-rounded students who earn good grades and are involved in extra curriculum activities and volunteerism.

Matthew, Vincent and Sama exemplify the mission of the memorial scholarship.  Matthew will attend the University of Scranton and Vincent will attend Saint John’s University in the fall.  Sama will attend the University of Southern California (USC) in the fall with plans to start a pipe band at USC when she gets there. Matthew and Vincent both plan to major in Criminal Justice to pursue careers in law enforcement.  Sama hopes to major in biology and pursue a career as a physician. She already serves as a volunteer first responder in the Berkeley Heights Volunteer Rescue Squad, where she is the Cadet Captain and an EMT.

“Most of the current members of the band, myself included, never had the honor to know the men we lost on 9/11 personally,” said Cassidy, “but we collectively hold true to the promise to never let these men be forgotten.”