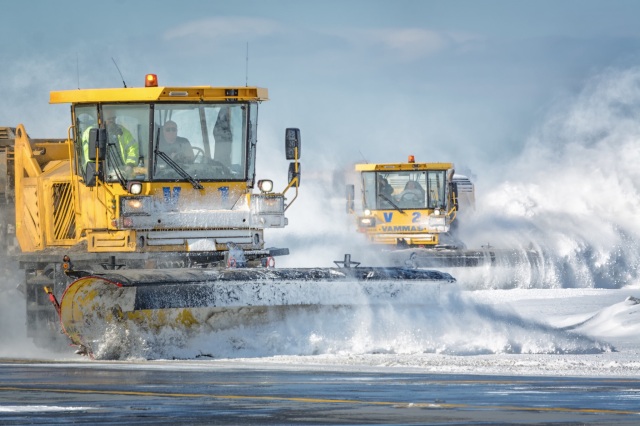 With the first significant snow storm of Winter 2016 expected to strike this weekend, many anxious travelers are wondering how their flight plans will be affected. Indeed, across the entire Northeast region, airport personnel are readying equipment and response plans to ensure the least amount of disruption to flight schedules as possible. Only during the worst storms, when an airport is overwhelmed by snow-and-ice accumulation, will an airport close most operations and terminals.

So what exactly goes into a winter-weather plan at major American airports such as JFK, LaGuardia and Newark Liberty?

Clearing snow and ice from an airport runway is akin to highway snow removal — except much harder and far more expensive, time-consuming and regulated by the Federal Aviation Administration. If snow removal were an amateur sport, airport runway maintenance would be in the Winter Olympics.

It isn’t necessarily a matter of volume—both highways and airports handle millions of travelers under a major time crunch. It’s all technique.

Highway crews use standard snowplows with steel blades, which can result in potholes that blow out tires and tend to spill hot coffee all over the upholstery. Potholes, of course, pose a very serious threat on runways. To keep them from developing, maintenance crews use special polyurethane blades that are far gentler on a runway’s surface.

The main enemy of the airport runway is ice. Massive snowfall can be handled with plows, snow blowers and runway sweepers – large vehicles with steel-bristle rotary brushes that scrape snow and ice from the runway. When layers of ice form on runway cement, it’s extremely difficult to remove and can cause major delays. So major preparations are made ahead of a significant storm to mitigate ice buildup. Large liquid-dispensing trucks cover each runway in the special de-icing formula.

To battle ice, road crews use a salt-and-chemical mix, an effective concoction but one that exposes vehicle to greater amounts of rust. Corrosion on an airplane is a major safety liability. That’s why airport crews deploy a special formula that won’t damage the airplane’s metal siding.  While equally effective, this formula is more expensive than the salt-based de-icers used on roads.

No two airports have the same protocol during extreme weather. Factors such as an airport’s size, its role (public vs. military, regional vs. international, etc.) and its surrounding climate determine the type of plan and equipment each airport uses. Airports in the New York/New Jersey region must prepare for varying weather conditions.  Furthermore, airports in similar weather regions – New York, Boston and Washington, D.C., for example, – often share information for effective storm preparation to minimize flight delays and keep planes taking off and landing safely.