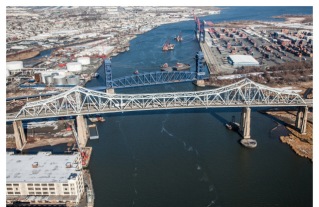 Can you say amazing? Well, let us say it 2,450 times and see where we end up.
To begin with, not only is the Goethals Bridge 87-years-old, but it’s one of the first bridges built during the Port Authority’s nascent years, during the time when transportation was dominated by private railroads. Spanning the Arthur Kill and linking Elizabeth, NJ with the Howland Hook area of Staten Island, NY, with a 140-foot channel clearance permitting the passage of deep-sea vessels, the Goethals is a steel-truss cantilever bridge being replaced with a modern cable stay bridge. In cable-stayed bridges, the cables are attached to the towers, which alone bear the load.  The new design will address the critical needs of a busy transportation corridor connecting to Interstate 278, and it will facilitate the movement of more than $33 billion of regional goods per year.

So what does the number 2,450 have to do with the Goethals Bridge? Does it have to do with the fact that the bridge leads directly to the New Jersey Turnpike at Interchange 13 or that it’s accessible via Routes 1 & 9? Well, no. Since you’ll never get it in a million years, here’s the answer. Each cable stay strand for the new bridge is made of seven wires that would stretch end-to-end for more than 2,450 miles: the approximate distance between New York and Los Angeles, and it’s the equivalent of driving across the six states of Pennsylvania, Ohio, Indiana, Illinois, Nebraska, Colorado and arriving in Utah.

1 Response to The Goethals Bridge: What’s the Number 2,450 Got to Do With It?