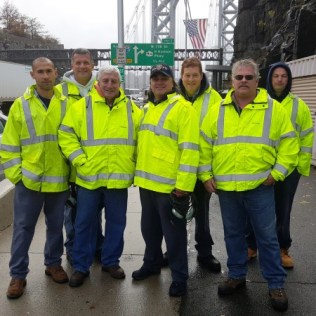 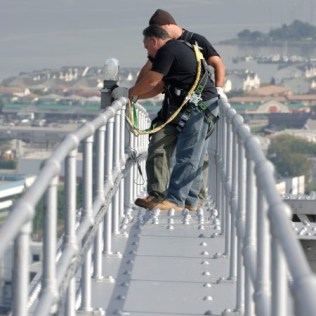 You read it right – daredevils.  Those daring Port Authority maintenance employees who routinely hang – albeit tethered with safety harnesses — suspended from the George Washington Bridge, performing inspections and maintaining the span from a height above the water nearly the length of two football fields!

Thank goodness winter in the NY/NJ region has been mild so far . . .because during extreme winter weather the cables on the GWB can become coated in a thick sheath of ice. Once the ice begins melting, sections of cable ice can break free and fall onto the roadway. When such conditions exist,  traffic traveling toward the upper level is diverted to lanes on the bridge’s lower level.

“Height-certified” crewmembers carrying wooden pick-axes climb to the top of the cables at midspan, hook on their safety ropes, and begin the trek to the very top of the tower. Swinging their ax handles as they climb, they break loose and pry free the ice. Just imagine looking down from those cables. I get dizzy just thinking about it.

“My first time out on the bridge was overwhelming because of the height and the breath taking view. Once I walked a few times to the necklace lights, it became second nature.”

And that’s not all.  Engineers also monitor the bridge cables for corrosion and wear. Inspectors drive long, wooden wedges into the cables to look for rust deep inside. These inspections usually are done at the midspan of the bridge.

Although most improvements to the bridge place the highest priority on improving traffic flow and preserving the structure, one daring job on the bridge raises public awareness about breast cancer and is likely saving lives.

For the last several years, the Port Authority’s sky-high electricians volunteer to install pink gels on the bridge’s 156 necklace lights to commemorate Breast Cancer Awareness Month.  The electricians move so quickly that the gels are installed in under an hour.  Moreover, as part of the longstanding observance of Veterans Day since 1947, the electricians ascend once more to the top of the bridge’s tower to unfurl the world’s largest free-flying American flag.

Just like other daredevils, the Port Authority electrical team puts in hours and hours of training and practice to master working hundreds of feet above ground.

Some people might call them crazy, but their work is essential to the region.  The Port Authority admires their courage. There’s no denying they are among the most fearless people in the world. Just like the late motorcyclist daredevil Evil Knievel and high-wire walkers, they do incredible feats that command our attention and respect.