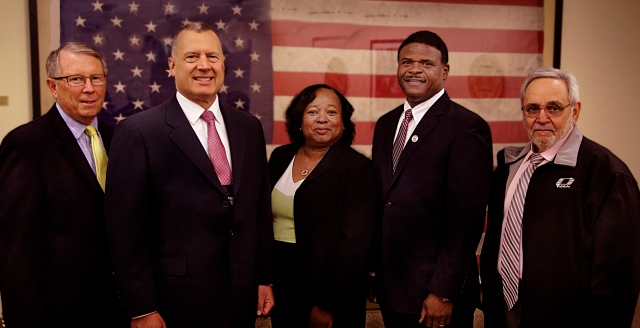 As America commemorates its glorious past in this 99th year after the first Flag Day on June 14, 1916, we salute five leading and extraordinary executives at the Port Authority, each of whom remarkably served their country with honor and distinction under the red, white and blue before assuming top posts at the Port Authority.

These heroic and inspiring leaders credit the military experience they gained in the Armed Forces as excellent preparation for their current roles on behalf of the millions of people throughout the New York/New Jersey region:  ensuring the airport system is world class, that consumer products on which we depend flow smoothly through our port, that bistate crossings are well-maintained, that the trains run on time, and the enterprise of transportation business is accomplished.  Every day brings major challenges.  Every day is unique. In fulfilling the mission of the Port Authority, these astonishing individuals exemplify the U.S. Navy’s time-tested slogan – It’s Not Just A Job. It’s An Adventure. Click here to meet our leaders.

Retired Army Colonel Tom Bosco, who heads the agency’s airport system as Aviation Director, honed his skills on the front lines in Middle East battlefields, serving as an Army officer and helicopter pilot during Operation Desert Shield/Storm.  During his 24-year military career, he was the recipient of the Bronze Star for meritorious service and, following 9/11, led a 553-person National Guard battalion to provide perimeter security for the site.

During a 33-year career, retired Coast Guard Rear Admiral Richard Larrabee served his country in major sea and landside commands, including a tour as Coast Guard Captain of the Port.  Before retiring in 2000 as Commander, First Coast Guard District in Boston, Mass., Rick oversaw the search and rescue operations following the fatal plane crash of John F. Kennedy Jr. in 1999 and the subsequent crash of Egypt Air Flight 990 later that same year.  For the past 15 years, Rick has led the agency’s Port Commerce Department, which oversees the Port of New York and New Jersey, the largest cargo operation on the East Coast.

Retired Air Force Staff Sergeant Cedrick Fulton spent 10 years in the military beginning in 1979 before moving on to a Port Authority career that has brought equally challenging work as Director of the Tunnels, Bridges and Terminals Department.  During his military service, Cedrick was assigned to the 1st Tactical Fighter Wing at Langley Air Force Base in Virginia and the 23rd Tactical Fighter Wing in Alexandria, Louisiana.  During his service as an Aircraft Armament Systems Specialist and a Contracting Officer, Cedrick received the Air Force Commendation Medal among other honors.

Retired Army Colonel Stephanie Dawson, the agency’s acting chief operating officer who directs all of the agency’s transportation business, had a groundbreaking military career, becoming the first female to serve as a brigade commander in the New York Army National Guard.  As Brigade Commander, she provided command and control of assigned battalions, including the 369th Special Troops Batallion, the 101 Expeditionary Signal Battalion, the 56th Personnel Services Batallion and the 104th Military Police Batallion.

Retired First Class Navy Petty Officer Michael Marino, the deputy director of PATH, served beginning in 1968 on the aircraft carrier USS John F. Kennedy, stationed in the North Atlantic and the Mediterranean.  During that time, Mike led a crew of sailors and Marines in assembling jet fighters with armament in support of overseas missions. He continued in the Navy Reserves until 1976, at which time he began a distinguished career in the railroad industry.

This entry was posted in New York, PANYNJ, Port Authority of New York and New Jersey, Portfolio and tagged Flag Day, US Navy. Bookmark the permalink.
%d bloggers like this: