The Visionaries Behind Solar Impulse 2 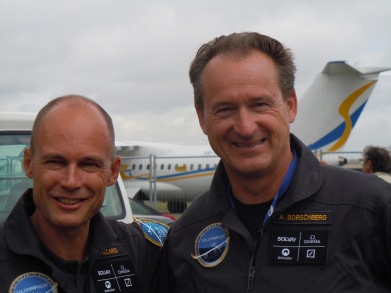 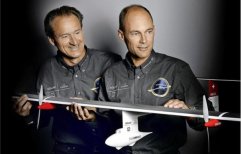 We’ve devoted the first two parts of this series to the around-the-world journey of the sun-powered Solar Impulse 2, its connection to the storied history of New York aviation (it’s scheduled for a stopover at Kennedy Airport) and the inner workings of the aircraft itself.  In this third entry, we’ll explore the fascinating histories of the men in the cockpit— Bertrand Piccard and Andre Borschberg.

When acclaimed television producer Gene Roddenberry was creating the character of the new Captain of the USS Enterprise in the hit television sequel, Star Trek:  The Next Generation, he looked toward C.S. Forester’s Napoleonic naval officer Horatio Hornblower for inspiration, a man courageous by nature, possessing unparalleled skill at his post and capable of intense introspection and reserve.

When Roddenberry needed a surname for this brave new Captain, he discovered genius in a legendary family of explorers. And after casting a trained Shakespearean thespian in the role, Roddenberry had his man: Captain Jean Luc Picard. Inspired by Hornblower, modeled after Patrick Stewart and named for Swiss adventurers Auguste and Jean Felix Piccard.

The association to the long-running Star Trek science fiction franchise  may be the most recognizable thing about the Piccard family, but it’s far from the most substantial. At every generational rung of the Piccard family is an explorer who has distinguished himself in the history of exploration.

Auguste Piccard, a student of science and a colleague of Albert Einstein, developed an avid interest in ballooning in the 1930s. Seeking measurements to provide empirical evidence to support Einstein’s theories, Piccard took to the sky in his self-built balloon. He reached a record altitude of 51,775 feet, becoming, with his partner Paul Kipfer, the first man to enter the Earth’s stratosphere.

In a classic example of the apple-doesn’t-fall-far-from-the-tree syndrome, Auguste’s son, Jacques, also was an acclaimed, record-breaking explorer, though Jacques was more inclined to explore the deepest depths rather than the highest heights.

Having pioneered many developments in underwater vehicles, Jacques Piccard, along with Lt. Don Walsh of the U.S. Navy, was first to explore the deepest known part of the world’s ocean, the Challenger Deep in the Pacific Ocean’s Mariana Trench. This accomplishment propelled the Piccards into a truly unique distinction: The father held the world record for altitude height, while the son claimed the record for sea depth.

While Andre Borschberg’s family name may not have the name recognition of the Piccards, he has built a distinguished career for himself as one of the most accomplished pilots and businessmen in the world.  Prior to his work on the Solar Impulse project, Borschberg was a jet pilot in the Swiss Air Force and a graduate of the prestigious Swiss Federal Institute of Technology in Lausanne and the MIT Sloan School of Management.

But it was Borschberg’s love of aviation that led him to launch the ambitious Solar Impulse project with Piccard. The project called on Borschberg to summon all the expertise he learned in the Air Force, in school and in practice.

“We need to find a way to build an aircraft that is super-robust and super-light at the same time, and above all extremely efficient with energy consumption, so as to need only minuscule amounts of energy in order to fly, but with the same degree of resistance as a normal airplane,” Borschberg told CNN in 2011. “Hence the great complexity of the project, which gives the true measure of its philosophy and its objectives.”

As he is doing with the Solar Impulse 2, Borschberg alternated flights with Piccard on the Solar Impulse 1, setting various world records in the process, including the completion of the first 24-hour solar powered flight and the greatest height achieved in a manned solar aircraft.

We don’t yet know when Borschberg and Piccard will leave Nagoya, Japan and continue on their historic journey that began and will end in Abu Dhabi. Such is the nature of all great explorations of course: The greatest feats of technological ingenuity and meticulous planning are feeble when pitted against the unpredictable whims of Mother Nature. A few weeks after their journey resumes, Borschberg and Piccard will touch down at the Port Authority’s JFK International Airport, forever connecting all New Yorkers to their momentous journey.