Memories of 9/11, for a New Generation

Posted on September 11, 2019 by PANYNJ PORTfolio

Almost all who experienced September 11, 2001 can recall where they were and what they were doing that dreadful morning.

For those of us who were children at the time, 9/11 is a seminal event, and for some, a pivotal childhood moment. Although at the time I was just five years old, the memory of that day has stayed with me in the 18 years that followed.

In fact, for the newest generation of Port Authority employees, the memories of 9/11 are embodied in the resiliency and strength of our colleagues who lived through that day and have been a part of us since we arrived for our first days on the job.

It was also evident this morning during the annual 9/11 commemoration. Scores of young Port Authority employees, all of us having grown up as the first post-9/11 generation, paid tribute to the victims and their families and mingled with our own Port Authority family, marveling at the spirit of agency survivors who return to their jobs day after day.

On the morning that changed history, my mom and dad arrived to pick up my twin brother and me early from preschool. The four of us had an early lunch at a local restaurant, where I can recall everyone’s eyes glued to the looped footage of the collapsing towers on the news. I observed the confused expressions on the faces of my parents and the unusual silence throughout the restaurant. It became clear that something was terribly wrong.

Later that evening, my parents, family members, and friends gathered in my backyard for what I thought was a normal gathering or party. They huddled closely around a 13-inch television that my dad set up on the patio to watch the president give his address to the nation. I watched through the window. My dad always recalls the eeriness he felt outside as not one single airplane flew over our house that night. 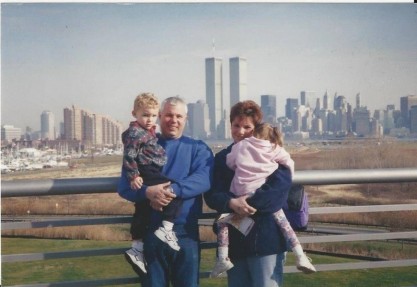 Photo captured in the year 2000 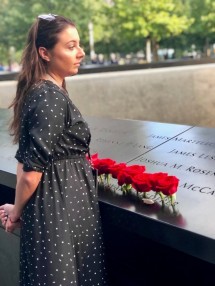 In the weeks that followed, my parents decided that it wasn’t safe to take our flight to Florida for our Disney World trip, understandably so. We drove 16 ½ hours instead.

With each passing anniversary, I began to better understand the life-altering impacts that day had on our nation. I became aware of the cultural influence, increased security, and related health issues associated with 9/11. The attacks remain a common topic of conversation with my first responder friends who still share with me their grievous experiences sifting through the debris at Ground Zero for days and weeks after the attacks.

I never imagined that 18 years later, I would be a Port Authority employee at the very place where a defining moment in U.S. history would take place. When I walked through the Memorial Plaza for the first time during my first week of work, all the stories I’ve been told about that day became real.

At work today, I had the opportunity to observe the 18th anniversary by participating in the annual 9/11 remembrance service on the Memorial Plaza. Although it was a somber morning, there was a sense of solidarity and resiliency to be highlighted. Working at the World Trade Center truly feels like an honor.

My friends and family always stress the importance of never forgetting the events that happened that day.

I walk through the Memorial Plaza almost every day, always taking a moment to glance at the waterfalls, sometimes stopping to eat lunch near the Survivor Tree. I do this as my own way of never forgetting that day and paying my respects to the victims of 9/11 as well as the men and women of the rescue and recovery efforts.