The scene in the World Trade Center’s Oculus this morning was one of enthusiasm, anticipation and wonder. After presentations from various LEGOLand officials, New York Stewart International Airport General Manager Ed Harrison was the one to pull a lever revealing the intricate three-foot LEGO model of the iconic building in which all of the attendees were standing.

LEGO Master Model Builder AJ Deguzman worked on the Oculus LEGO model in Florida, and it was shipped up to New York City once completed. “It was pretty daunting to build since it was so unique in structure,” he said. The trick? “Build from the base and then put some LEGO magic in there.”

LEGOLand’s upcoming New York Resort, set to open in Spring 2020, will sit on a sprawling 500-acre site in Goshen, N.Y., just 16 miles from New York Stewart. The international destinations served by Stewart and a new bus route from Port Authority Bus Terminal to LEGOLand will contribute to the number of annual visitors and the overall economic growth of the region. 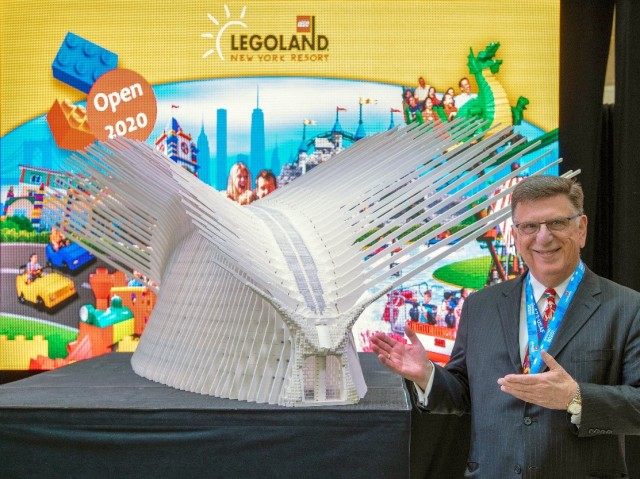 Harrison with the Oculus LEGO model

“When I met with LEGOLand executives at Stewart a couple years ago, they saw our facilities, they saw our runways, and they saw our potential to bring international passengers to Orange County, New York, and LEGOLand,” Harrison said. “It’s an exciting moment for us. New York is open for business!”

LEGOLand’s 150-acre New York Resort is the first of its kind in the Northeast, and it will encompass over 50 rides, shows, and attractions, as well as a 250-room hotel.

A rendering of the LEGOLand attraction coming to Upstate New York

“It’s been so great working with the Port Authority to put this on,” said Matt Besterman of the LEGOLand New York Resort team. “Unveiling this model Oculus right here in the Oculus is our tribute to the spirit of New York.”

The model displayed today in the Oculus and will eventually be installed in Miniland, an interactive part of the park featuring animated LEGO-built U.S. cities.