A Tale of Two Engineers

Posted on February 27, 2019 by PANYNJ PORTfolio

The Port Authority was not on Amanda Rogers’ or Cathy Mahoney’s radars when they started college.

After an internship one summer, Rogers compared notes with a classmate who shared stories of his own internship with the Port Authority. She was jealous of all the field work experience he gained and became interested in what the agency had to offer. Mahoney’s introduction was slightly different. Without her knowing, her college had sent the Port Authority a binder of potential candidates for available jobs — including her resume, which caught the agency’s eye.

After 18 years of service on some of the Port Authority’s signature projects – from big airport construction assignments to major rehabilitation efforts at the George Washington Bridge – they were recognized recently as two of Professional Women in Construction’s “20 Under 40 Outstanding Women in Construction.”

“Amanda and Cathy are well deserving of their recognition. I’ve seen them both continue to grow as leaders and take on new challenges,” said Port Authority Chief Engineer Jim Starace. “They have a great combination of communication, interpersonal and technical skills, and they are examples of the bright future of this agency.” 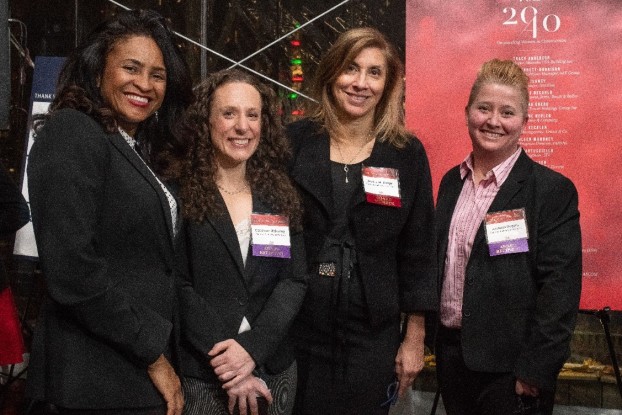 Mahoney’s parents were both engineers and she knew she wanted to follow in their footsteps since she was 14. She began her career at the Port Authority as a traffic engineer. Through her experiences on various project assignments, Mahoney realized that she liked combining her technical expertise with the business aspects of engineering and made a pivot in her career path.

She decided to pursue an MBA at Fordham University while working her way up the leadership ladder. Today, she heads the Engineering Department’s Program Management Unit as its program director.

“I went further faster than I ever could have imagined,” Mahoney said. “I never felt like I was being treated differently because I was a woman; I came, I worked, I gave my all and then moved up to the next thing. The Port Authority was always willing to give me opportunities.”

Mahoney in her office at 4 World Trade Center

Rogers also worked in a wide array of positions at the Port Authority before she reached her current role. Her first project was in Jamaica working on the AirTrain Terminal, where she contributed to the rehabilitation of the Long Island Rail Road Station and construction of an 8-story office building.

“I was pretty star-struck at the beginning and felt like, ‘Wow, what did I just get myself into?’” she recalled.

Starace, a longtime Rogers mentor, told her to “follow the projects.” After Jamaica Station, she worked at JFK and LaGuardia Airports. Now, she is leading the $2 billion “Restore the George” program as the Senior Engineer of Construction at the George Washington Bridge and Bus Station.

Amanda Rogers, on top of the George Washington Bridge.

Rogers and Mahoney think that the most rewarding parts of their jobs involve the people with whom they work.

“When I started in this position a few years ago, it was five people and now we’re up to 30,” Mahoney said. “I’m so proud of the team we’ve built, and seeing how motivated they are each day is what keeps me going.”

Added Rogers, “It sounds so cheesy, but I work for the company that runs New York City. Every day I go home with an unbelievable level of pride.”