Posted on September 19, 2018 by PANYNJ PORTfolio

When you think of airports, you usually associate them with aircraft, the airlines that fly them, big terminals and long taxi queues.

But there’s much more to an airport than meets the eye. On an average day, thousands of employees at airports across the world are devoted to the removal of debris from runways, taxiways, roadways and other facility property.

The Federal Aviation Administration has a name for it – FOD, for Foreign Object Debris. It covers any object located in an inappropriate airport location with the capacity to injure airport or air carrier personnel and damage aircraft. It’s not simple, or inexpensive, to keep air facilities clear of FOD. The annual direct and indirect costs in damaged equipment, flight delays, reduced efficiency and litigation run into the billions.

What qualifies as FOD ranges from building materials, fragments of broken pavement and general litter to birds, wildlife and stray animals. FOD can lead to blown-out tires at high speeds, debris being sucked into an engine, and even damage to components of ground-handling equipment, such as baggage tugs and shuttle buses. 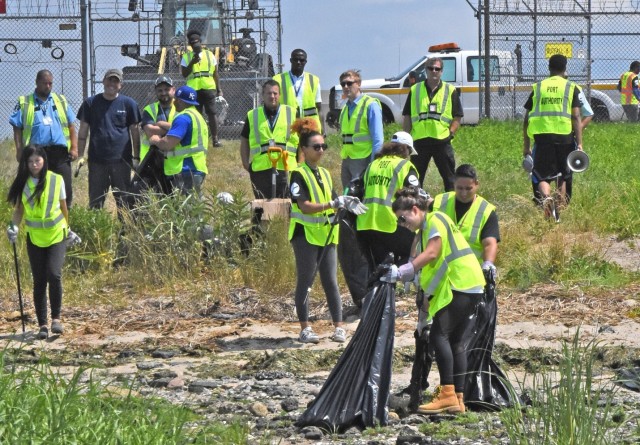 John F. Kennedy International and the Port Authority’s other airports, large and small, are not immune. The area surrounding JFK is diverse, with an ecosystem comprising various types of vegetation and animal life. Every year in June and July, JFK is inundated with hundreds of Diamondback terrapins seeking sandy areas to lay their eggs.

“While this isn’t the most conventional task, it is vital to maintaining an incident-free airport,” said Laura Francoeur, the Port Authority’s chief wildlife biologist.

One constant concern for Port Authority airports is birds flying into active airspace, with strikes ranging from a small bird hitting a windshield to an engine ingesting a flock. Most famously, the miraculous emergency landing of US Airways 1549 on the Hudson River in January 2009 came after a flock of geese were sucked into the plane’s engines, causing massive engine failure.

Port Authority maintenance crews check the airfield twice per shift for any objects or debris ranging from the turtles, to nuts and bolts and sometimes raccoons, and along the perimeter—they call it PM, or a preventative maintenance routine. Litter retrieval and disposal also covers the vehicle service roads, ramps and the air operations area.

The local community does its share, participating in FOD cleanup days organized by the Port Authority. Several times a year, the agency’s cleanup days are open to anyone over the age of 16 and typically involve cleaning up the beach area of Jamaica Bay as well as around cargo buildings.

“The preventative measures we take at Port Authority airports are to protect critical aircraft machinery and maintenance processes by reducing the risk of FOD events,” said Teri Rizzuto, manager of airport operations at JFK. “It’s really important for the airport community to have an opportunity to get involved.”