The Holland at 90: A Drive Down Memory Lane

Posted on November 13, 2017 by PANYNJ PORTfolio

Today marks the 90th anniversary of the opening of the Holland Tunnel, the first trans-Hudson vehicle crossing linking New York and New Jersey and designated as a National Historic Landmark by the U.S. Department of the Interior in 1993.

The Holland has had its share of unique, innovative and entertaining moments over the past nine decades.

New hands on the wheel. While the two state commissions were the original operators of the new tunnel, their stewardship didn’t last long. In April 1930, the Port Authority of New York & New Jersey – then called the Port of New York Authority – assumed operations of the three-year-old underwater conduit.

The Holland Tunnel from the Jersey City side, circa 1930

What’s in a name? Not surprisingly, few thought Hudson River Vehicular Tunnel would last as the project’s permanent name. That honor would go to Clifford Millburn Holland, the first tunnel chief engineer who designed the tunnel but didn’t live to see his dream completed. Holland died of a heart attack the day before the two halves of the tunnels were scheduled to finally connect in October 1924.

Key to success. Even the President of the United States had a key role, literally speaking, in its unveiling. From his yacht in the Potomac River, President Calvin Coolidge turned a gold telegraph key – the kind used to send Morse code – to signal the parting of two flags situated at the front of the tunnel at 4:55 p.m. And the HT was officially open.

Walk, don’t drive. The tunnel was opened to foot traffic before it allowed cars to pass through. In the first two hours, more than 20,000 people walked the 1.6 miles from the Jersey City side to Lower Manhattan.

The price was right. The Holland Tunnel cost $48.5 million to build, an extraordinary financial commitment at the time – and a fraction of what it would cost today. If the project were undertaken now, the estimated price tag would be well in excess of $1 billion.

Fanning the fame. None of the Holland’s “firsts” is as important as its celebrated ventilation system. Ole Singstad, one of the facility’s original engineers, designed an automatic ventilation system with a total of 84 blowers and exhaust fans and four ventilation buildings, two on each side of the Hudson. The fans cleared exhaust fumes every 90 seconds. That made the Holland the first mechanically ventilated underwater vehicular tunnel, setting an engineering standard still in use today.

One of the Holland Tunnel’s exhaust fans

Driving the catwalk. State-of-the-art ventilators weren’t the only novel idea attached to the Holland. In 1955, the facility’s newest invention, the so-called catwalk car, made its debut. The electric vehicle allowed police to patrol the entire length of the tunnel to avoid getting stuck in traffic. 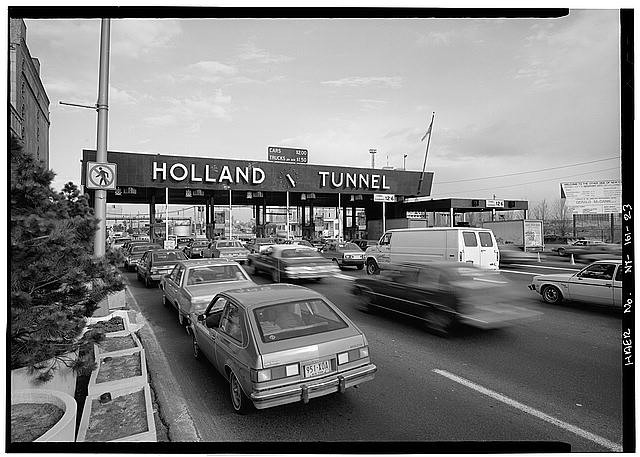 A typical commute at the Holland Tunnel in the 1980s