Posted on October 6, 2017 by PANYNJ PORTfolio

As part of its annual program to support Breast Cancer Awareness Month, the agency has installed new lighting and ceremonial displays at the Port Authority Bus Terminal (PABT) and, for the ninth consecutive year, strung a necklace of 156 LED lights along the cables of the George Washington Bridge.

Floor decal at the bus terminal

GWB light, from white to pink

Sample of gel used to pay tribute and raise awareness 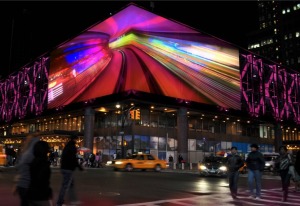 The campaign is to raise awareness about the scourge of breast cancer in the United States. It’s the second-leading killer of women, after lung cancer, with more than 250,000 cases of invasive breast cancer expected to be diagnosed in U.S. women this year, according to the American Cancer Society.

This year, the main concourse of the PABT’s South Wing is being illuminated with pink-wrapped gels, the thin transparent covering that fits over regular lights. It’s the same gel-lighting system in use at the GWB, a project initiated by Port Authority electrician Chris Bonanno as a tribute to his sister who contracted the disease. The gels are inscribed with the name of a survivor, a patient, or someone who has died.

At the bus terminal, a pink ribbon decal on the main floor anchors the interior display, along with special pink lighting at its Performing Arts Stage during select performances. External presentations also will be appearing on the PABT’s Mediamesh, the enormous video display that wraps around the terminal at Eighth Avenue and 42nd Street. It will go pink periodically with programmed messaging throughout the month.