In a peaceful corner on the fourth floor of Terminal 4 at Kennedy Airport are four prayer chapels side by side representing four of the world’s major faiths – Protestant, Catholic, Judaism and Islam. 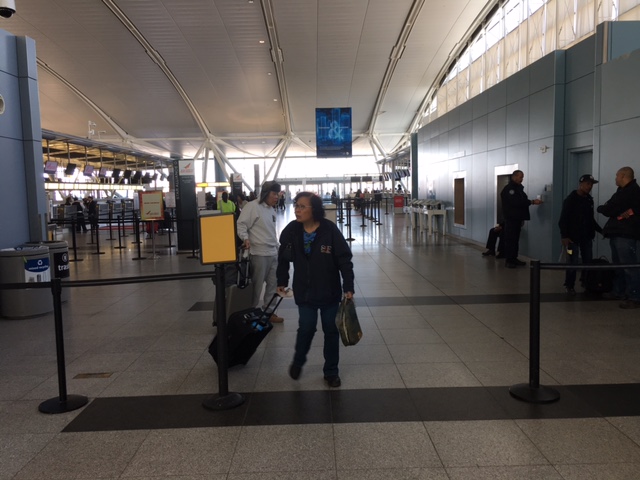 Foot traffic in Interfaith Alley depends on the goings-on at JFK, which occasionally finds itself at the center of political and social turbulence throughout the world.

Most busy U.S. airports have designated spaces in which to pray, but Kennedy is believed to be the only major airport in North and South America with a Catholic church, a Protestant chapel, an Islamic center and a Jewish synagogue.

The chaplains who preside at Kennedy are a one-of-a-kind team available to serve the spiritual needs of travelers as well as about 37,000 JFK employees.They are Pastor Romeo Dabee, Christ for the World Chapel; Father Chris Piasta, Our Lady of the Skies; Rabbi Ari Korenblit, the JFK International Synagogue, and Imam Ahmet Yücetürk, of the JFK Airport Islamic Center. 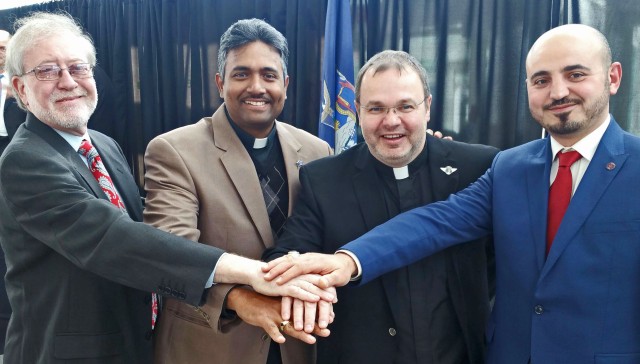 Left to right:   Rabbi Ari Korenblit, Pastor Romeo Dabee, Father Chris Piasta and Imam Ahmet Yuceturk:  all for one and one for all.  Photo credit:  Jeff Yapalater

Dabee calls the team “The Fantastic Four.” Each handles other pastoral duties outside of JFK but are on call 24/7.  They break bread together and meet regularly to discuss matters that affect the interfaith airline community.

“The four of us realize we’re all God’s children. We get along with each other well. There’s absolute peace between us.  We’re a model for what the world could be and should be,” said Korenblit.

A view of the JFK International Synagogue facing the bimah, a raised platform at the front of the sanctuary. This is where the rabbi stands and where the reading of the Torah takes place.

An embroidered Star of David adorns a table inside the bimah.

The rabbi recalled a recent incident in the aftermath of the travel ban when he received a call from TSA about two Muslim passengers, who had been retained and needed a place to stay for the night. He happened to be the only cleric around, and so he immediately tried to do what he could to help. The thought that he was a rabbi cleric and therefore couldn’t help Muslims never once occurred to him.

“I just got busy and located the closest mosque that could house them overnight. In the end, it worked out well,” said Korenblit.

Dabee’s official title is JFK Airport Community Minister, who dedicates his time as pastor of Christ for the World Chapel. He knows many of the local denizens of the airport community personally, having delivered family eulogies and sat bedside with cancer patients.  He knows their stories:  the weddings and divorces, the children mixed up in drugs and elderly parents who fall out of bed and break hips.

Located on the departure level of Terminal 4, the Christ for the World Chapel is open for prayer and meditation from 6 a.m. to 11 p.m.  A weekly Wednesday service is held at 12:30 p.m.

Meeting the spiritual needs of travelers is a different story.

“I call it my minute ministry,” said Dabee. “The connection with a complete stranger happens in one moment.  The focus of my ministry is a message that God is in this place. That God is here at JFK in the midst of chaos and sometimes even threats.  I’m here to let people know they are valuable and not dispensable cogs in a capitalized machinery.” 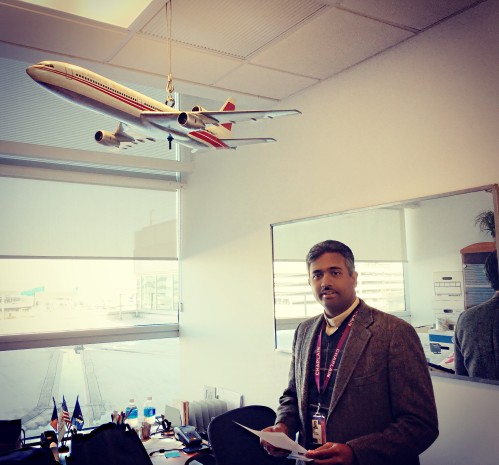 Pastor Dabee at his desk in Terminal 4. He believes that Interfaith Alley is “one of the best kept secrets in the world” and he encourages blog readers to seek solace with a member of the Fantastic Four while on travel.

Piasta, the pastor of Our Lady of the Skies, says there’s a big difference between the way religion works on the street and in neighborhoods, where the perspective is concerned with that particular community, and the way it works at JFK. “At JFK, whatever happens to one of us happens to all of us.  If someone is disrespectful to any person in our community, it literally affects us all,” he said. 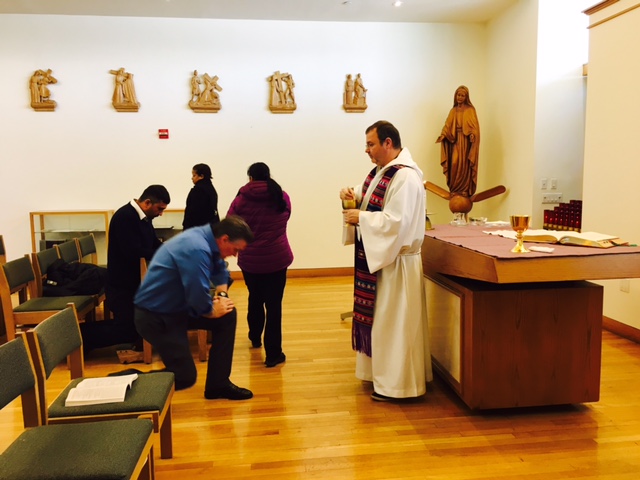 Father Chris delivers the sacrament of the Holy Eucharist at masses scheduled throughout the week. 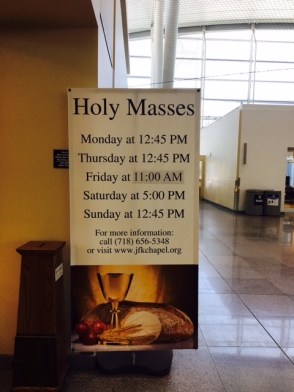 The amount of foot traffic along “Interfaith Alley” depends on the goings-on at Kennedy, and what’s happening in the rest of the world. JFK occasionally can find itself in the center of political and social turbulence, such as families forced to flee global catastrophes such as volcanic eruptions in Iceland or the civil war in Syria. 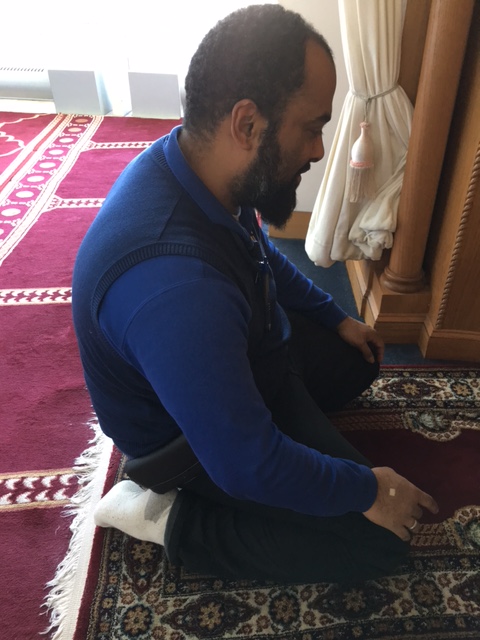 Abdul Qadir works nearby and tries to spend a few minutes in prayer as often as he can.

The chapels operate as a spiritual fortress against religious intolerance and race hatred. Yücetürk, who serves as spiritual leader of the Islamic Center, believes that the word tolerance often is associated with interfaith communities. “But that’s not it at all,” he said, “We don’t tolerate each other.  We genuinely get along and we love each other.”

The slideshow below is a glimpse of the beautiful stained glasses, statuary and religious symbols on display in the four faith chapels in Interfaith Alley.