Port of New York & New Jersey: Pasta by the Boatload

In the first quarter of 2016 alone, the Port imported a veritable pageant of Italian pasta, hundreds of different kinds in about 600 containers. That’s 11,294 metric tons of pasta that is shipped mainly from the Port of Naples, with more on its way.

But when it comes to America’s obsession with pasta, don’t just take the Port’s word on it.

“If there’s a more perfect food than pasta, I’ve yet to taste it,” said Pasquale DiFulco, manager of aviation marketing and communications for the Port Authority aviation department. 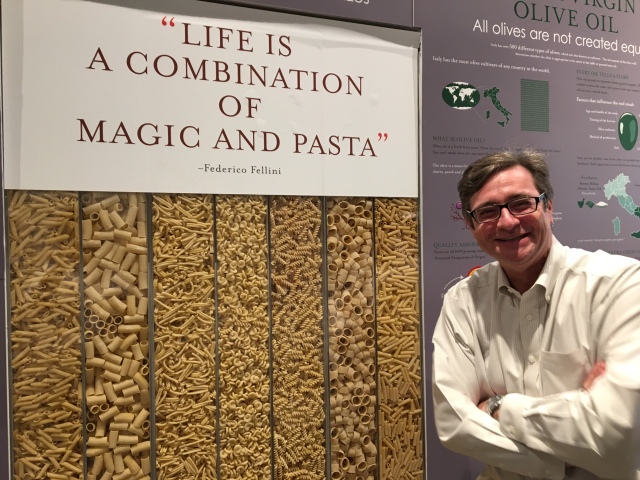 For Pasquale DiFulco, life has no meaning, no purpose, no direction without pasta.

“My dad worked for decades at Star Ravioli practically in the shadow of Teterboro Airport, and would bring home all sorts of pasta all the time: spinach fettuccini or tortellini or manicotti,” he recalled. “As a kid, imported Italian pasta (from our Port—who knew?) was a household staple, a meal served by Mom every day without fail, topped with peas, broccoli, potatoes and finely minced onions, fennel and sardines, and best of all, with a Sunday ragú teeming with meatballs and sausage and veal and braciole that cooked down all day.”

Though the consumption of pasta and other carbohydrates has been criticized lately because of their association with obesity and gluten allergies, America is no slouch when it comes to carbo-loading. But the hard data on which country wins the pasta eating contest is fairly unanimous: Italy tops all lists.

According to the International Pasta Organization, Italy eats at the seemingly gluttonous rate of 26 kilograms per person annually, while the American appetite is more restrained at a mere 8.8 kilograms per person, the equivalent of about 20 pounds.

“Americans love pasta, but we Italians still eat about three times more,” said Dino Borri, the director of purchasing for Eataly International, a renowned purveyor of high-quality pasta in cities around the world, including New York.

Said Borri, “It looks like a lot, but it’s not a lot. It’s what you do with it. The big difference is that Americans prefer more sauce.”