Take the George or the Martha past the Necklace, that’ll get you across the GWB. Heading through the Lincoln Tunnel to the Sputnik, keep an eye out for the Toothbrush.

Simple, right? Only if you speak Port Authority.

Every institution has its own language peculiarities, and the Port Authority is no exception. So, as a public service, here’s a short tutorial of nicknames commonly used throughout the agency. Origins and meanings to some will seem obvious; others have been lost to time and obscurity.

The Necklace – This refers to the 156 lights that adorn the George Washington Bridge cables, which can change in color to reflect special occasions – green for Girl Scouts Centennial Celebration recently, for instance, or pink during Breast Cancer Awareness Month in October. 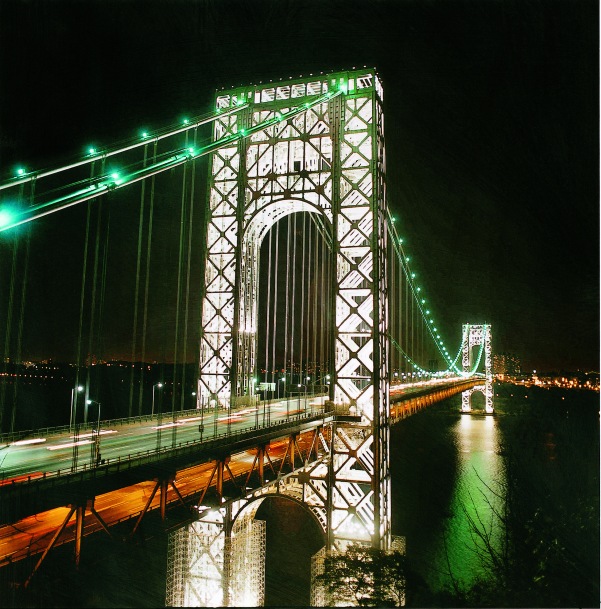 The George – Upper level of the GWB.

The Martha – Lower level of the GWB.

Toothbrush – A favorite of seasoned bridge and tunnel veterans, this is what they call the truck that is used to scrub the Lincoln and Holland tunnels. The Toothbrush is so named because it literally scrubs clean all of the tunnels’ white tiles with soap and water.

T-Rex – Left to its own devices, the Port of New York & New Jersey would silt up like the glass bulb of an hourglass, leaving cargo and cruise ships unable to navigate the harbor to other ports. To maintain adequate channel depth, a variety of dredging tools are used, but none more impressive than one of the biggest and most bodacious barge-mounted dredges in the world – T-Rex, with metallic teeth capable of biting down to 65 feet.

Donkey Trail – Initially a dirt road at Newark Liberty International Airport created as a short cut from a restricted service road on-to the aircraft movement area. Over the years, it’s been paved and now has the appropriate signage, but it’s never lost the original name.

Doghouse – This term described the 4-5 stories of temporary steel built by ironworkers at One World Trade Center, which allowed them and the construction cranes to work above the roof of One WTC.

Housetops – From our friends at PATH: the manufactured manganese plates that serve as a guard rail in a rail switch. These help guide the train wheels through the track switch while also protecting the opposite switch point.

Dogbones –Another from the world of PATH: The mechanical fasteners used to join two long concrete timbers in construction that would normally be too large to handle as one. One of those nicknames that seems a more natural – and much easier – way to describe this useful tool.

Sheep Run – This expression can be heard among the ground crew in and around airport terminals. It was coined by airline pilots to distinguish between themselves and the “Sheep Run,” the General Aviation area for private planes at an airport.