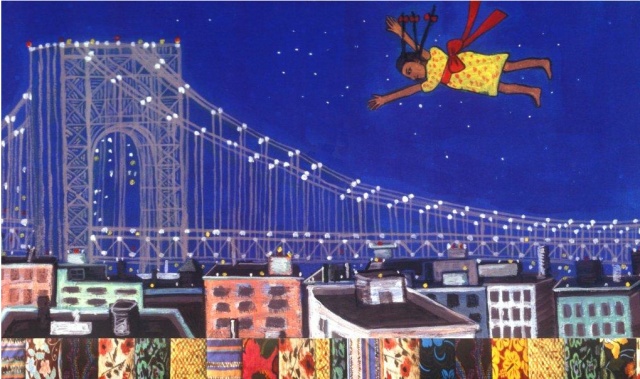 The George Washington Bridge may not be quite as famous as that other well-known bridge in Brooklyn, but if popularity in the lofty world of bridges is measured by a span’s ability to inspire world-class art, the star power of the GWB is undisputed.

For the past 85 years, the George has sparked the imaginations of writers, composers, filmmakers and, perhaps most importantly, generations of children. Perhaps no artist has impressed the hearts and minds of children more through the bridge’s beauty than Faith Ringgold, renowned painter, textile artist and award-winning author of the children’s book Tar Beach. In the book, Ringgold recounts the dream adventure of eight-year-old Cassie Louise Lightfoot, who was born the same day the George Washington Bridge opened in 1931.

Cassie is based on Ringgold’s own childhood memories growing up in Harlem during the 1930s. To escape the sweltering summer heat of their Harlem apartment, Cassie’s family would go up to the roof and cool off on the “beach,” where Cassie dreamed of someday flying over the George Washington Bridge.  One evening she actually does: “Now I have claimed it,” Cassie says.  “I can wear it like a giant diamond necklace. It is one of my prized possessions.” 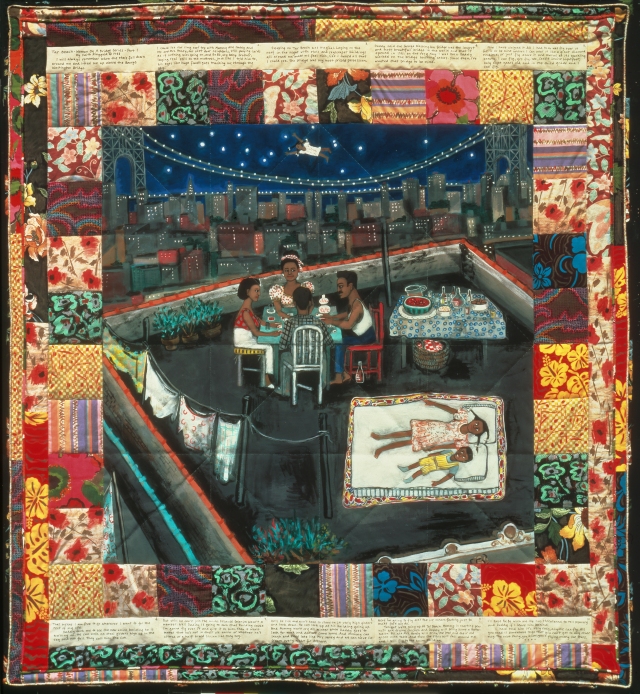 Tar Beach is adapted from Ringgold’s original Tar Beach story quilt on which the narrative text of the children’s book, along with Ringgold’s autobiographical information, is woven on the quilt’s border.   And like her character, Ringgold, who now makes her home in Englewood, N.J., a short distance from the span, has been a lifelong fan.

“I never want to be more than three minutes from the George,” said Ringgold. “I could always see it as I grew up.  That bridge has been in my life for as long as I can remember.  As a kid, I could walk across it anytime I wanted.  I love to see it sparkling at night.  I moved to New Jersey, and I’m still next to it.”

Tar Beach was the first of Ringgold’s 11 children books.  The book was recognized as a Caldecott Honor Book in 1992 as one of the most distinguished picture books for children in America.

Other Ringgold masterworks are owned by many of the most prestigious museums of America – the Metropolitan Museum of Art, the Guggenheim, the Museum of Modern Art, the Philadelphia Museum of Art and the National Museum of American Art in Washington, D.C.  Her private collectors include Oprah Winfrey and a host of other luminaries.

For Ringgold, Cassie’s fantastic flight through the urban night sky symbolizes the potential for the freedom and self-possession of all women. “The women in my art,” said Ringgold, “are actually flying; they are just free, totally. They take their liberation by confronting this huge masculine icon—the bridge.”