Bayonne Bridge: Giant Cranes Give the Bayonne a Much-Needed Lift

Two of the world’s most visually arresting pieces of construction equipment – looking more like colossal candy-colored robots than mundane cranes – are toiling away on either side of the Kill van Kull, building new roadways that will serve the elevated Bayonne Bridge. 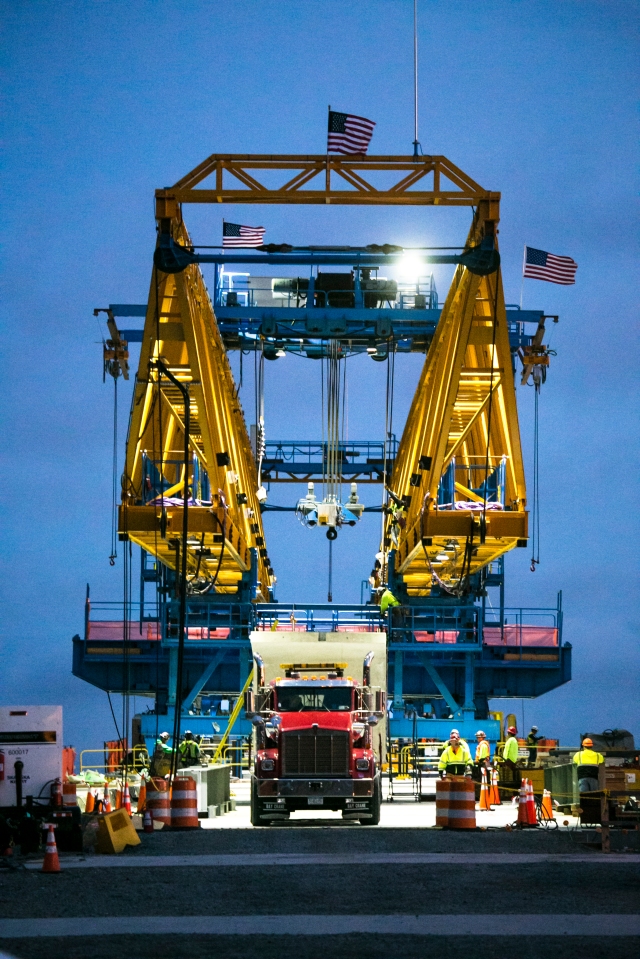 Known as segment-launching gantries, or gantry cranes, these mechanical giants haul and install the 70-ton concrete segments that make up the roadways. As big as they are – 500 feet long and 1 million pounds each – they work with finesse and precision, moving the roadway segments into just the right place for human workers to bind them with steel, epoxy and more concrete.

Custom-made for the Port Authority’s ambitious Bayonne Bridge “Raise the Roadway” project, the gantry cranes often operate at night when the bridge is closed to traffic. With their crayon-bold colors lit up in the dark, they seem to have arrived from another world – a Marvel Comics universe, perhaps, or a child’s oversized toy bin.

The project marks the first time engineers are building a bridge roadway above the original span, even as the lower road continues to carry traffic. It will maintain the steel arch that makes the Bayonne Bridge a civil engineering landmark, while giving drivers a safer, wider and more modern roadway with 12-foot lanes, new shoulders, a median divider, and a 12-foot bike and pedestrian walkway. See for yourself in the slideshow below and the time-lapse video of gantry cranes at work by the Port Authority’s Mike Dombrowki.

The “Raise the Roadway” project is designed to elevate the bridge from 151 feet to 215 feet. A joint venture of Skanska Koch/Kiewit Infrastructure Co. (JV), it will enable the world’s largest container vessels to pass beneath the bridge on their way to Port Newark/Elizabeth and Howland Hook, following the expansion of the Panama Canal.

With the Bayonne Bridge, it is fitting that even the gantry cranes combine strength and power with elegance of design.  Othmar Amman, the Port Authority’s then-Chief Engineer and the Bayonne’s legendary designer, said at its 1931 opening that great bridge projects “must not only be useful, but they must also conform to the aesthetic sense. This was one of the motives for the selection of an arch spanning the entire river in one sweeping graceful curve.”

True to Amman’s spirit, the design was groundbreaking. Its 1,675-foot steel arch was the world’s longest, and kept that title for 45 years. Its path through the Kill is diagonal, not perpendicular to the water – both to conform to the existing streets and create a more dramatic profile. Its hyperbolic arch becomes shallower toward the center, “principally for its pleasing appearance,” Amman said.

The New York Times wrote in 1931 of the Bayonne’s “symmetry and fineness of detail … that is impressive and haunting.” The American Institute of Steel Construction declared it the “Most Beautiful Steel Bridge” over the George Washington Bridge, which opened the same year.

7 Responses to Bayonne Bridge: Giant Cranes Give the Bayonne a Much-Needed Lift