The Marine Air Terminal at LaGuardia: The Age of the Flying Boat 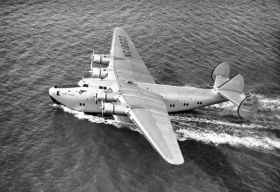 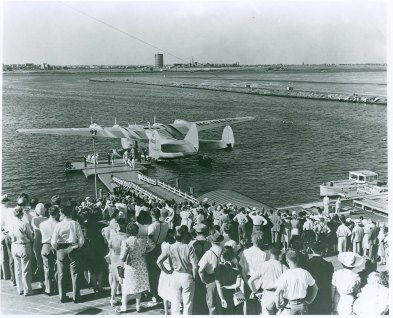 The Yankee Clipper was a sight to behold. One of nine active Boeing 314 Clippers, the Yankee was a massive flying boat—one of the largest aircrafts of its time—made so that passengers could enjoy the transatlantic commute in style: two decks, opulent dining rooms and private compartments.

The Yankee has the distinction of making the inaugural flight from the LaGuardia Airport’s historic Marine Air Terminal, taking off from the Long Island Sound and touching down in Lisbon. The first generation of passenger travel, an era marked by an unprecedented convergence of sea and air, was underway.

In its heyday, there was nothing more impressive than the flying boat.  Americans had just begun to comprehend the very notion of flying when they arrived, these gargantuan vessels with massive hulls; to think that they could sustain flight seemed an impossible dream. But they did fly. And for a moment they ruled the sky.

Flying boats reached their apex on November 2, 1947, when Howard Hughes took flight in his Hercules. Hughes’ white whale, the undertaking in which —according to him—he would invest his “life sweat,” the Hercules remains the largest flying boat in history, with the longest wingspan of any plane that has ever taken flight. Her maiden voyage captivated the world.  But she would never fly again. Alas, the golden age of the flying boat was coming to an end.

During World War II, the U.S. used flying boats regularly for military operations, but after the war, as passenger air travel boomed and more and more land runways were built, flying boats became obsolete. They survive, but as a niche—used primarily to travel in and out of archipelagos and other areas where land space is limited. (Flying boats differ from the much smaller floatplanes, which are still in wide use. Floatplanes use long, thin pontoons to achieve buoyancy; the flying boat uses its fuselage.) Today only vestiges from the flying boat’s era remain, yet one remnant survives right here in New York, in the aforementioned Marine Air Terminal at the Port Authority of New York and New Jersey’s LaGuardia Airport.

As its name would suggest, the Marine Air Terminal was built specifically to cater to the influx of these marvelous, massive seaplanes that inundated the skies in the mid-20th century. An Art Deco building designed by the firm Delano & Aldrich in 1939, the Marine Air Terminal is the only active airport terminal in the country that dates back to the first generation of passenger travel. (Befitting this stature, the terminal was placed on the National Register of Historic Places in 1982.)

It’s a grand sight, the Marine Air Terminal; on the interior walls of the rotunda, a remarkable mural captures the entire history of aeronautical conquest. Painted by abstract expressionist painter James Brooks, the 235-foot-long mural, titled Flight, traces human interaction with the sky to its earliest roots, to the mythical Greek craftsman Daedalus and his son, Icarus, who flew too close to the sun. From there, the mural continues, depicting the flying devices of Leonardo Da Vinci, the historic Wright Brother’s flight at Kitty Hawk and, of course, a flying boat—a Pan American Clipper. In an airport often maligned for its lack of aesthetical beauty, Flight sticks out: a marvelous work of art surrounded by Spartan buildings of industry.

Eventually, flying boats were phased out at the Marine Air Terminal. Today, it mainly serves the hourly shuttle flights between New York and Boston. But all over the terminal are reminders of its grand history. There’s the mural, of course, but some much more subtle. Lining the terminal’s exterior roof is a frieze of terracotta fish, a pair of wings on their dorsals. These flying fish look odd from a distance—they almost appear to be giant dragonflies—but they are a deliberate affectation: They are made to resemble the grand Pan American Clippers of yesteryear. Every passenger who enters the Marine Air Terminal walks under them, perhaps not even noticing these symbols of a bygone era, when the famous terminal in LaGuardia was the hub of the most magnificent airplanes in the world.