Posted on October 1, 2015 by PANYNJ PORTfolio 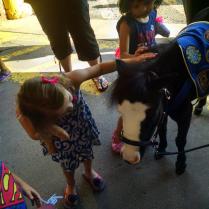 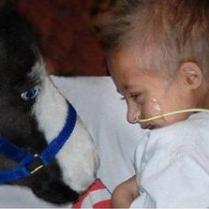 Kenny Tietjen served New York City as a Port Authority of  New York and New Jersey police officer. He lost his life during the events of September 11, 2001. He was only 31. Today his name lives on—in the memories of those who loved him, as the namesake of the Ken Tietjen Memorial Foundation, and in the visage of a miniature horse that provides comfort and support to those suffering. The horse is named for Ken. The horse’s name is Valor.

Ken’s sister Laurie Tietjen founded the Ken Tietjen Memorial Foundation to honor the memory of her brother and to help the many who still suffer from the tragedy of 9/11. Her organization collaborated with the Therapy Horses of Gentle Carousel, a not-for-profit that uses miniature horses to provide therapy to those who need it—the ill, injured, those suffering from Post-Traumatic Stress Disorder, etc.  Recently, Laurie visited with various police departments, first responders, and family members from around the city, bringing along a few miniature therapy horses to comfort the officers, to offer a moment of peaceful reprieve to people who deal with stressful and dangerous situations on a daily basis.

Laurie and the horses were not alone however; at the First Precinct, they were joined by former host of The Daily Show and 9/11 victims’ advocate Jon Stewart. It was certainly an odd sight for hard working men and women at the First Precinct—a pair of tiny horses and one of the most influential celebrities of this generation—but it was also a welcome one, a fun, light-hearted moment in between the intensity of the job.

Valor the horse is becoming a celebrity in her own right. Only a year old, she was recently assigned to a first responder’s position with the Los Angeles Sheriff’s Department. In that role, she visits with people who have lived through traumatic events, showcasing her special ability to “heal hearts and bring smiles to people.”

Additionally, Valor will serve as a public face for the sheriff’s department, working at a variety of community outreach and civic events. Public service is an appropriate job for Valor; just like the fallen hero from which she takes her name, Valor will dedicate her life to her community.

The Therapy Horses of Gentle Carousel, which comforts tens-of-thousands of people per year, continues a long tradition of equestrian therapy. Greek literature of antiquity tells of horses tending to the emotional wounds suffered by soldiers on the battlefield. Horseback riding was used to treat soldiers returning home from the First World War, and today, hippotherapists use horses to improve patients’ neurological function and sensory processing. Though horses are the archetypical beasts of burden, the source of comfort and therapy they have provided to humans for centuries cannot overstated.

The organization’s visit, courtesy of Laurie Tietjen and the Ken Tietjen Memorial Foundation, was much appreciated by all the officers who were lucky enough to attend. We here at the Port Authority of New York and New Jersey can’t thank them enough. The horses on hand provided comfort of course, but more importantly, they offered the officers an opportunity to pause and remember their fallen brothers and sisters.