Portfolio at the U.S. Open

Posted on September 10, 2015 by PANYNJ PORTfolio 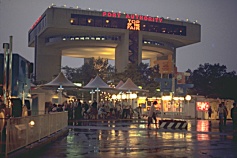 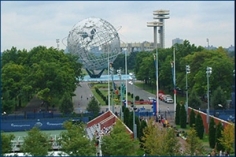 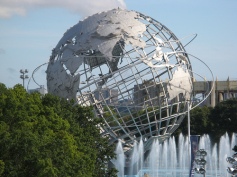 It’s a safe bet the tennis crowd at this year’s U.S. Open at Arthur Ashe Stadium will not be cheering for both Serena Williams to win the Grand Slam and the Port Authority’s contributions to the 1964-65 World’s Fair, even though the futuristic Fair also commanded center court at Flushing Meadows Corona Park just over 50 years ago.

Unfair to compare a major sports event with New York history you say?  Certainly it is.  On a recent visit to the stadium, I too was preoccupied with scoring a selfie with the celebrity tennis star.

In fact, so distracted that I almost failed to realize I was standing on ground where Port Authority roots are particularly deep and storied.

That is, until my inquisitive seven-year-old grandson visiting New York from Maryland for his first-ever U.S. Open Kid’s Day interrupted my celebrity stalking with an obvious question as we strolled the north promenade of the Unisphere:   “What’s that big metal thing Grandmom? It looks like a world!!”

Some 50 years ago when I was a small child at the Fair, my first glimpse of the Unisphere was equally astonishing.  Like Spaceship Earth at Epcot, the Unisphere was the centerpiece of the Fair.  It is 140-feet high, 700,000 pounds and made from stainless steel as a representation of the Earth.  The sculpture heralded the dawning of the jet age.

The Port Authority wasn’t responsible directly for the Unisphere, but the agency played an indispensable role at the World’s Fair by designing the transportation pavilions set aside for airlines, automakers and oil companies.

The Port Authority even built the world’s first roof-top heliport at a time when helicopters were a relatively new thing.   The helicopters lifted off from Top of the Fair Restaurant for aerial tours of the Fair for the ticket price of $6.50.  The restaurant today is widely known as Terrace on the Park.

Also in 1965, the lease between the City of New York and the Port Authority, under which the agency operates LaGuardia Airport and John F. Kennedy Airport, was extended to December 2015.

Aside from being home to both airports, the history of Queens always has been tied closely to aviation.  It’s the birthplace of transatlantic flight when three Curtiss N-C, or “Nancy Boat” airplanes, left the U.S. Naval Air Station in Rockaway, Queens, just a short distance from Flushing Meadow.

As I told my grandson the story of my own trip to the World’s Fair as a young girl, and how his great-grandfather filmed me standing in front of the sphere with his 8 mm camera, I was careful to add that tennis in America also began in this place, which likely will resonate the strongest with him given that his nickname is Ashe.  He too aspires to compete one day in the U.S. Open, and by then, I’ll really be competing for his attention.