The Port Authority Bus Terminal’s Ralphie: An Ode to the “The Great One” 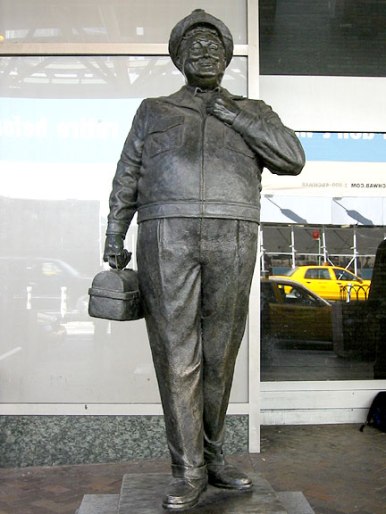 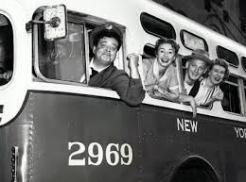 Standing near the Port Authority Bus Terminal’s southwest corner, gazing happily across Eighth Avenue between 40th and 41st streets, the statue of immortal bus driver and TV icon Ralph Kramden radiates undefeatable optimism.  Which could mean he’s hatched another money-making scheme that will end in shambles – but above all else, his expression is optimistic.

Sometime in 1999, TV Land came up with the idea of developing and erecting statues of some of its fictional TV characters as a way to publicize the network and its shows.  The statue for Ralph Kramden became the first of these projects to be located in NYC.  And where else would be more perfect than the busiest bus terminal in the world, the Port Authority Bus Terminal in mid-town Manhattan.

The Port Authority accepted the 4,000 lb. bronze statue because who better than the beloved television character, Ralphie, to greet commuters and bus drivers in front of a place where 220,000 daily commuters and thousands of buses pass through every day?

The landmark statue by the late sculptor Larry Nowlan works triple shifts as a meeting place for tourists, a seat for weary commuters and a great backdrop for the taking of selfies.  Chest out and shoulders pulled back, lunch pail in one hand and thumb hooked behind his lapel with the other, Ralphie-boy, replete with cocky grin, brightens the mood on one of the most heavily trafficked sidewalks in the world.

In a metaphorical kind of way, the character of Ralph Kramden has been with the bus terminal from the beginning.  The terminal’s south wing opened on December 15, 1950 – about the same time Kramden was a driver for the fictional Gotham Bus Company. During the ensuing years, his character has made a gigantic imprint on American pop culture history.

In just one season of 39 episodes, from 1955 to 1956 – and in recurring sketches on Gleason’s variety shows before and after that time – Kramden and his co-stars originated the DNA formula for many American sitcoms that followed in its footsteps.

The cast included Ralph’s sharp-witted, all-enduring wife Alice (Audrey Meadows), best friend Ed Norton (Art Carney, who won six Emmy Awards for the role), and Norton’s wife Trixie (Joyce Randolph).  Ralph may be the one with a statue, but all four Honeymooners are TV legends.

In its creation of bizarre, now-immortal one-liners, The Honeymooners is a predecessor to Seinfeld:  “I do not possess a villa in France, a yacht, or a string of poloponies.”

Or, “They gave me that horse with the stomach in its clock.  I mean the clock in its stomach.”

Or “Pins and needles, needles and pins; a happy man is a man who grins.”

As one of the first TV shows to depict characters with financial struggles rather than an idealized life of ease, The Honeymooners was a precursor to shows like Roseanne.  Its depiction of family – with characters who trade harsh comic insults, but actually love each other – served as a pioneer to a host of shows — Sanford and Son, Everybody Loves Raymond and, of course, Norman Lear’s All in the Family.  Even those who’ve never seen The Honeymooners, Ralph’s anger management issues are legendary.  His bug-eyed simmer would build and build, then explode into incoherent rage (Unable to tolerate his mother-in-law: “She’s a BLABBERMOUTH, Alice, a BLAAAAABBERMOOOUUTH!”).

The inscription at the base of the statue reads, “Jackie Gleason as Ralph Kramden/Bus Driver – Raccoon Lodge Treasurer – Dreamer/Presented by the People of TV Land,” the latter describing a legion of devoted fans, who still tweet about the show and share fond memories of the show on the Jackie Gleason and the Honeymooners Facebook page.

1 Response to The Port Authority Bus Terminal’s Ralphie: An Ode to the “The Great One”