Ever wonder how airplanes, roller coasters and tickling the ivories might be connected?

Here’s a clue:  It has nothing to do with stomach dropping rides and the gnashing of teeth.  In this case, the answer is the same family – the Steinways – the most important piano manufacturers in the world.

The Steinways owned the Gala Amusement Park on North Beach in the early years of the 20th century, once providing recreation for its workforce living nearby in Steinway Village.  These workers created a demand for Steinway’s network of streetcars, trolleys and ferries that provided access to land that is now LaGuardia  Airport.

By 1928, the park had fallen on hard times.  The cotton candy vendors closed up shop.  The roller coaster and the Ferris wheel came down.   At the urging of Mayor Fiorello LaGuardia, the land was graded, the amusement area buried, and a commercial airport was created and named the Glenn H. Curtiss Airport, after the aviation pioneer.  Located on the waterfront, the airport could service both landplanes and seaplanes.  It had three gravel runways; the longest was 2,300 ft.

After a publicity stunt in 1934 in which Mayor LaGuardia refused to deplane in New Jersey from his TWA flight to New York, the foundation was laid for the LaGuardia that we know today.  Ground was broken in 1937 to create a 558-acre airport in Flushing, Queeens.  Dedicated in 1939 as New York Municipal Airport, “LaGuardia Field” was tacked onto the name by hyphen a couple weeks later.

Within a year, LaGuardia was the busiest airport in the world with a “Skywalk” observation deck.  For the princely sum of ten cents, customers could gaze at the airport ramp area and beyond.  The first year’s revenue collected from the turnstiles was $150,000 . . . in dimes.

Mayor LaGuardia died in 1947 – the same year the Port of New York Authority (now the Port Authority of New York and New Jersey – PANYNJ) leased the airport from the city for the next 50 years.

By the 1960s, the original 1930’s main terminal building became congested and outdated, much as the current one is now in 2015.  The Central Terminal Building (CTB) that replaced the old one is still in use today.  Dedicated in 1964 with a design capacity of 8 million annual passengers, the $36 million, 1300-foot-long structure was completed in time for the 1964-65 World’s Fair at Flushing Meadows.

In 2004, the Port Authority and the City of New York concluded an agreement that ensures the agency’s continued operation of LaGuardia and JFK International through 2050.  In 2014, LaGuardia set an all-time high record for total passenger travel of almost 27 million.

On December 2, 1939, LaGuardia opened to commercial traffic when a TWA DC-3 from Chicago landed minutes after midnight. Within a year, LaGuardia was was the busiest airport in the world.

One of the major features was the Observation Deck featuring a “Sky Walk” that wrapped around the building’s airside. It cost 10 cents to take a look.

The Sky Bar served hot dogs from the Observation Deck. 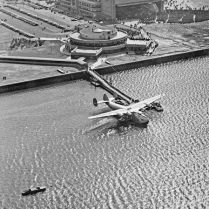 Across the field, the Marine Terminal became the port for flying boats that transported wealthy passengers to Europe.

An overhead mural inside the terminal portrayed the history of flight. The large round room is also home to a bust of Fiorello LaGuardia.

LaGuardia served as one of the main departure points for the military during World War II. 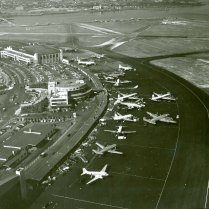 Eleanor Roosevelt at LaGuardia in 1960