Giving New Life to a JFK Temple of Flight

From the moment renowned architect Eero Saarinen presented his design for the $12 million TWA Flight Center in 1957, his mission was to create a building unlike anything built before in its dramatic expression of travel during the golden age of flight.

“The fact that to some people it looked like a bird in flight was really coincidental,” Saarinen told the press at the time. “That was the last thing we ever thought about.”

Perhaps best described as flight frozen in motion, the flight center, one of Saarinen’s most famous projects, has since ascended to the rarified air of architectural masterpiece. At his early death at age 51, Saarinen was both the most prominent and the most promising architect in America.  Today his master work is poised for a new future as the TWA Flight Center Hotel, after being dark for more than 15 years.

The completed hotel will have 505 guest rooms, eight food and beverage establishments and a 10,000 square foot public observation deck. Its revival wouldn’t have been possible without a $20 million investment by the Port Authority, and more than a decade of agency commitment to preserving the historic building, despite financial pressures to do otherwise. 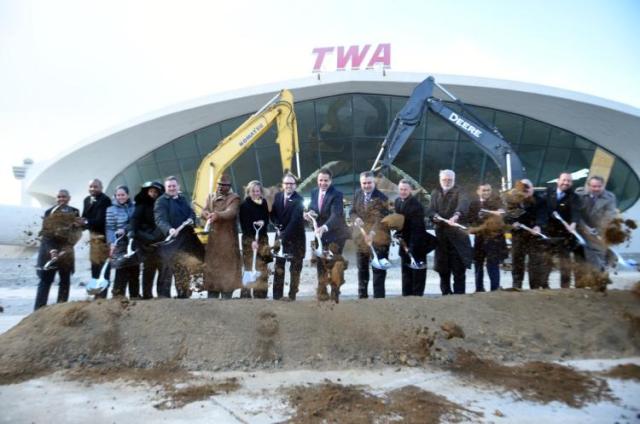 “It was very easy to feel a sense of attachment to the building,” said Don Free, program director for the Port Authority’s Aviation Business Development unit, who was part of the preservation effort. “Inside the flight center, you are awed by the incredible design, and at the same time, you feel very comfortable and not dwarfed by the structure because of the organic feel of the curving lines.”

Completed in 1962, the flight center was an airport mainstay for nearly four decades. But after TWA went into bankruptcy and ceased operations, the facility closed in December 2001.  In the decade which followed, a new flight center wasn’t a high priority until construction work began on the adjacent JetBlue Terminal. JetBlue is physically connected to the Flight Center by two walkways extending off both sides of the main terminal and connecting to two “flight wings” or departure terminals that were constructed at the same time as the main terminal.

After 30 years, the building was designated historic by the New York City Landmarks Preservation Commission, and few years later, listed on the National Register of Historic Places well before its 50th anniversary.  This occurs only for the most extraordinary buildings.  But even so, capital expenditures were made by TWA in the most efficient ways possible, with little regard for the significance of the architecture.  Bag belts were inserted through glass curtain walls and ticket counters were in installed in areas not designed for those uses.  The congested and chaotic terminal that resulted was not one that attracted much interest from developers.

Still, the Port Authority never lost sight of its desire to return the terminal to the public realm. The Redevelopment Advisory Committee (RAC), co-chaired by Jim Steven, program director for JFK Redevelopment, met more than 30 times as part of the preservation effort to redefine the future use of the space.  The RAC included federal and state historic preservation entities as well as the Municipal Arts Society, The Trust for Historic Preservation, the Federal Aviation Administration and many others.

“Of course, the challenge was the wide variety of opinions on what it meant to protect this historic resource,” said Free.

To some it meant retaining an almost museum-like reverence for the center, while others wanted to restore vibrancy to a place that once bustled with activity. Prior to the $20 million investment, the Port Authority had sought proposals for its rebirth, but the only response came from a group interested in converting the terminal into a museum that lacked the finances to make it work.

The worst fate for the building would have been demolition, the second worst, remaining vacant. It was simply too small to operate as an airline terminal anymore.  It’s conversion to a hotel made the most sense.

Russell Kriegel, principal architect of the $20 million restoration for Engineering, took the lead in hiring Beyer Blinder Belle, an architectural firm best known for the restoration of Grand Central Station, to stabilize the flight center. Steven also led various efforts to provide the public with access to the building through events such as the annual Open House New York.  Additionally, he facilitated countless tours by historic groups and universities, and is charged with leading the Port Authority coordination on the hotel’s construction.

“Everyone involved in restoring and redeveloping the Flight Center had a sense of ownership,” said Free. “We all shared an overarching goal of returning the building to the public so that as many people as possible could enjoy its richness.”